A terrible thing has happened in this village. Someone must be to blame.

Dreaming the Devil is an intense existential LARP about a 16th century witch trial in rural Italy.

I can say, for certain, that your LARP Dreaming the Devil changed the way I think about torture and pain mechanics in gaming forever. -- Jacqueline Bryk, Damocles Thread Development

The most intense game I've ever played. - David Leaman, How We Play

In order to download this game you must purchase it at or above the minimum price of $3.75 USD. You will get access to the following files:

Dreaming The Devil is a 19 page, 3-player, historical larp about Italian witch trials in the 16th century. It's mature, and it definitely might benefit from more of a content warning on its page, but it's well-written and a solid setting-shift away from american witch trial games. Also the safety mechanics inside the game are robust.

You play as a witch, their accuser, and a Florentine inquisitor come to judge the situation.

The game is structured as a series of questions and accusations, during which the witch has extremely little power.

There *are* mechanics for torture, something that the game is thankfully super cautious around, and they come with a rider that no one can describe the torture and no one can react as if they are being tortured. Torture also never generates useful information, only generates a yes to the next thing the Inquisitor asks about, and this is true in the game as well.

Apart from this, Dreaming The Devil has a number of other noteworthy beats. It introduces 16th century Italian Catholicism in a sort of detached way, and provides a number of interesting cultural notes in this style. Also, each character has a way to win inside the context of the game, even if they die in the process, so while the witch is powerless in the narrative, they have a surprising amount of control over whether they win.

The overall tone of the game is somewhat sympathetic towards the inquisitor and the accusers, positioning them as people who just want a sense of divine order and security in their salvation after death, but it likewise makes it clear that the witch is very much a victim, and that the trials are unjust.

I think I'd recommend this to groups that like small, intense character studies, and that don't mind heavy themes and tragedy. Dreaming The Devil is absolutely a well-crafted game, although I would also advise people to mind the warnings and be careful when they play it.

-Page 3, Torture, "In their answer, the Witch must Inquisitor exactly what he thinks the Inquisitor wants to hear."

I really enjoyed reading this well-considered game. However, I noticed that the second page of both of the "accuser" handouts says that "the priest is a Witch." (at the end of the first paragraph on the right side). Although the text of the motivations on each "accuser" handout match the gender of the witch, I wondered if there were any other differences on the "accuser's" second page besides that one line. 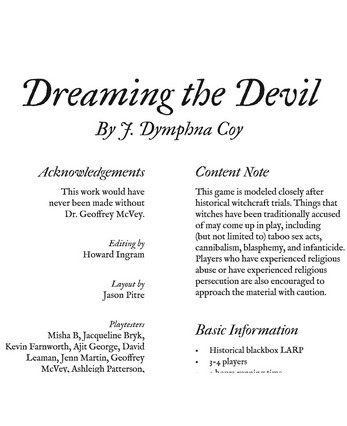